Comedian Bright Okpocha, popularly known as Basket Mouth ,has come under criticism by his tweeter followers and others on the social media platform for fixing a comedy concert in Hamburg, Germany on February 25 same day Nigeria Presidential and National Assembly Elections will hold

While some described the move as insensitive and patriotic, others faulted it as taking his jokes too far.

A Nigerian in diaspora tweeting under the name Obiologue @IsokoTolopia wrote
“My girls bought me a Baskemouth show ticket for the 19th Feb as my birthday gift. I told them I shan’t go. You know why? I can’t be laughing at jokes from a JERK.
I am vexed by people who see their country as a bout of a joke only but won’t lift a finger to help make it better”

@honillate tweeted: “Rest, you’re actually being inconsiderate of your Nigerian fans at this point. No be everything be comedy”

@Chima_Teey :”Selling tickets for a show on February 25th is selfish. No difference btwn you and those that selfishly sell their votes, and play footy on the streets on election day. Shameful!
#CollectYourPVC”

@DeCaptn: “Omoo see way back gutter guy wey God show mercy Don forget where his coming from. Like you don’t you have a responsibility to this country on the 25th Feb with your Huge fan base? Omo I’m shocked at what these gutters dey display these days o chia money oo”

In a trending tweet, Okpocha wrote via his verified handle @basket_mouth thanking Hamburg for the love as tickets were almost sold out 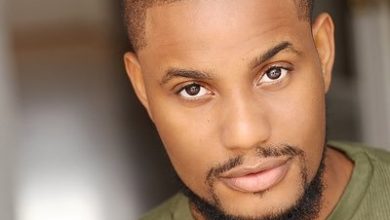