Among those arrested is Okunrobo Smart who was convicted in 2022 for internet fraud.

According to the anti-graft agency, they were arrested at their hideout in Benin City, following actionable intelligence. 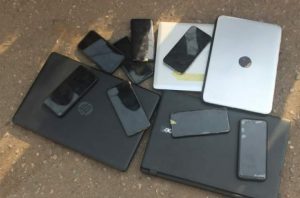 Items recovered from the suspects at the point of arrest include mobile phones, laptops and a Mercedes Benz C300.

The EFCC added that the suspects will be arraigned in court soon.